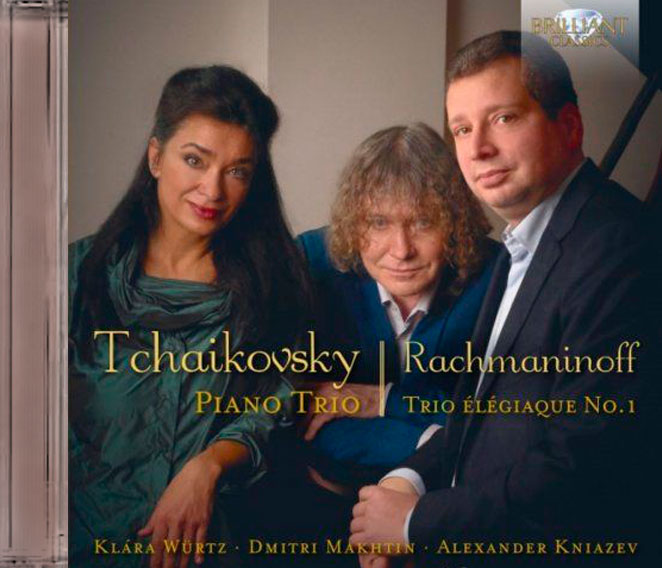 A classic pairing: two masterpieces of Russian chamber music in a new recording by three distinguished interpreters of Romantic-era repertoire.

It was writing for this combination of instruments in the unlikely context of the slow movement of his Second Piano Concerto that seems finally to have convinced Tchaikovsky he could turn to the genre of piano trio proper and overcome his previous antipathy to it. In fact, following the death of the pianist Nikolai Rubinstein in March 1881, the Piano Trio was composed within less than a year, and with unusual fluency.

Its unconventional format – a sonata-form movement followed by an extended theme and variations – takes as its model Beethoven’s final sonata Op.111. The emotional intensity of the first movement is dispelled by the lighter mood of the second, which may represent personal memories of Rubinstein, including visiting an amusement park and attending a ball, and the charmingly lopsided theme is apparently based on a folk melody he had heard in Rubinstein’s company.

On the day of Tchaikovsky’s death in October 1893, Rachmaninov began work on a Trio élégiaque in D minor in his memory. He later composed a much more extended trio in homage to Tchaikovsky’s example, but this single movement is no less impassioned and accomplished in its way. Both trios have attracted countless great interpreters down the decades, to whose number may now be added the Russian pairing of Dmitri Makhtin and Alexander Kniazev, with the Hungarian pianist Klára Würtz, who has made many admired recordings for Brilliant Classics. Together they form a partnership of deep understanding and sympathy.

Tchaikovsky’s Piano Trio Op. 50 is possibly the greatest Russian piano trio, and one his finest and most emotional works. It was written “In the memory of a great Artist”, Nikolai Rubinstein. The trio, of immense scope and impact, consists of two movements, a Sonata-form first movement and a Theme and variations. The moods swing from the heroic, the elegant and charming to the elegiac and eventually to the darkest gloom.
Rachmaninoff’s Trio Elégiaque in G minor is the “small” piano trio, a one movement work of great beauty and drama.
This new recording is by three international soloists: Dmitri Makhtin (violin), Alexander Kniazev (cello) and Klára Würtz (piano). They do full justice to the emotional impact of this music, their red hot playing is full of intense drama, passion and spontaneity. The excellent liner notes are by David Moncur.